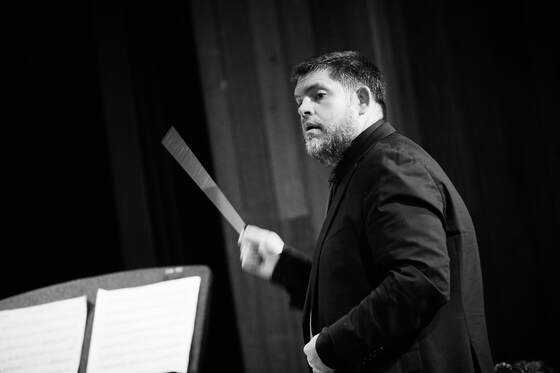 Maestro Randy Ward is an active music performer, conductor and educator in the Northern Virginia area. He currently serves as the principal cellist of the Washington Metropolitan Philharmonic Orchestra and has served on the WMPA board of directors as musician representative. He has been conducting youth orchestras in the area since 2005. He comes to the position of WMCO Music Director after working as a music teacher in Fairfax County public schools for the last four years.

His background includes extensive experience directing young musicians as a Fairfax County Schools Orchestra director, faculty member at Levine School of Music, GMU Potomac Arts Academy, and Carroll County Strings Project, and as a faculty member at numerous summer programs throughout the region. Also, as a graduate student at George Mason University, he directed a lab orchestra of undergraduate music majors for 3 semesters.

In addition to the experience listed above, he has served as a clinician and/or adjudicator with AYP, WMYO, Greater Washington Suzuki Association, Alexandria City Schools, and Loudon County Schools. His career as cellist includes orchestral performance experience as a member of Washington Metropolitan Philharmonic, Long Bay Symphony, Fayetteville Symphony, and Alexandria Symphony.

The combination of experiences he has as a performer, arranger/orchestrator, classroom teacher and orchestra director, private studio teacher, sectional coach, and music student provide a background in musicianship, score study, and rehearsal technique perfectly suited to lead WMYO or WMCO.

Maestro Ward graduated from East Carolina University with a Bachelor of Music in Cello Performance and earned his master’s degree in musical pedagogy at George Mason University. He is a Norfolk, VA native who began music study in the public school system.  As a young child, his mother was sound technician for bluegrass group "The Nothin' Doin' Band" and this was his first exposure to the "fiddle." Nevertheless, he decided to pursue classical study on the cello beginning in 5th grade, continuing through undergraduate and graduate study, and ultimately attaining the principal seat in WMP and performing as soloist with the group in December 2017.